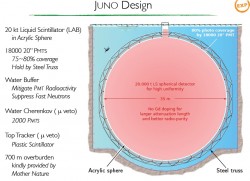 The Jiangmen Underground Neutrino Observatory (JUNO) is a multipurpose neutrino experiment designed to determine neutrino mass hierarchy and precisely measure oscillation parameters by detecting reactor neutrinos from the Yangjiang and Taishan Nuclear Power Plants. Moreover the detector, located at 700-meter deep underground, observe supernova neutrinos, study the atmospheric, solar neutrinos and geo-neutrinos, and perform exotic searches, with a 20-thousand-ton liquid scintillator detector of unprecedented 3% energy resolution (at 1 MeV).
Neutrinos are elementary particles in the Standard Model.There are three flavors of neutrinos, known as νe, νμand ντ . The neutrino flavor states are superpositions of three masseigenstates (ν1, ν2 and ν3), which undergo quantum interference during the traveling, causing neutrino flavor changes. This phenomenon is known as neutrino oscillation or neutrino mixing.The amplitudes of oscillation are connected to the mixing angles θ12, θ23 and θ13. The oscillation frequencies are determined by the difference of squared neutrino masses, Δm2_ij = m2i-m2j.
The major goal of JUNO is determining neutrino mass hierarchy by precisely measuring the energy spectrum of reactor electron antineutrinos at a distance of ~53 km from the reactors. A relative measurement technique was developed based on the interference of two different oscillation frequency components driven by Δm2_32 and Δm2_31, which can reach to a sensitivity of Δχ2>16 in the ideal case of single reactor and single detector, and Δχ2>9 considering the spread of reactor cores and uncertainties of the detector response. If the absolute value of Δm2μμ(which is an approximation of Δm232) measured from accelerator experimentsis included with a precision of 1%, the sensitivity of mass hierarchy can be improved toΔχ2>25 and Δχ2>16 in the ideal and real case, respectively.
JUNO is located in Kaiping, Jiangmen, in Southern China. It’s about 53 km from the Yangjiang and Taishan nuclear power plants, both of which are under construction.The planned total thermal power of these reactors is 36 GW. There is no other nuclear power plant within 200 km. A 270 m high granite mountain provides good shielding of cosmic muons, which are the major sources of backgrounds. To further suppress muon induced backgrounds, the detector is designed to be located deep underground through a tunnel, and the total overburden will be 700 m rock. Experiment construction will start in 2014 and complete in 2019, including a tunnel, an underground experiment hall, a water pool, a central detector, a muon tracking detector, and some ancillary facilities.